Fair And Equal Michigan Gets More Time To Collect Signatures 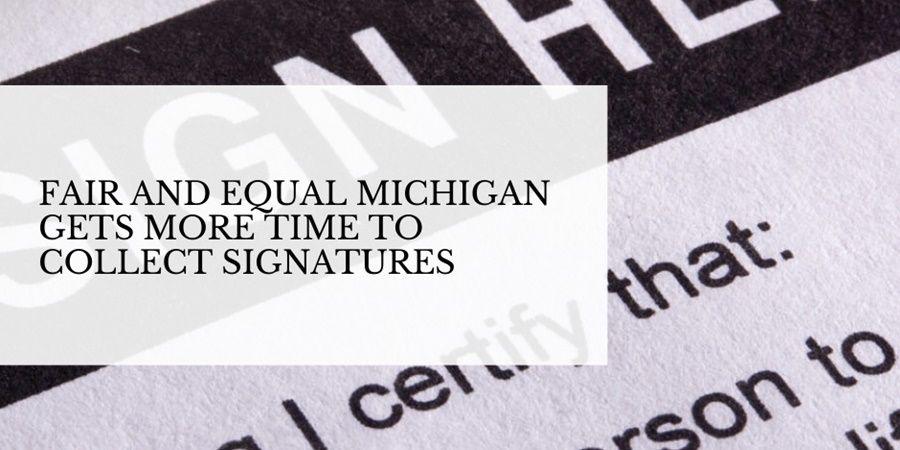 In Michigan, the initiative to protect LGBTQ people from discrimination was in jeopardy, victim of the coronavirus.

Fair and Equal Michigan was committed to pushing the initiative to add protections based on sexual orientation and gender identity to Michigan’s Civil Rights Act.

Everything was going perfectly well. All they needed was the signatures to send the petition to the November vote.

By the time the coronavirus outbreak began, they had already collected thousands of them. It was a great start, but there were still a lot of signatures missing.

Later, confinement stopped the collection, but a solution was quickly found: e-signatures.

The organization has gained 12,000 more thanks to this strategy. This may seem trivial, but given the conditions, it’s not that bad.

So, along with two Democrat legislators, state Senator Adam Hollier and state Representative Mari Manoogian, Fair and Equal Michigan filed a complaint against the Michigan Secretary of State, the Board of Canvassers, and the Director of Elections.

The group challenged rules for citizen-led ballot initiatives. They demanded a reduction in the number of required signatures, which is 340,042 in 180 days.

“It’s not the same as the face to face contact that’s authorized under the constitution. Public gatherings are really the most effective way to gather signatures still in terms of amount and the cost associated with it still,” said Steven Liedel, an attorney representing Fair and Equal Michigan.

An earlier court decision could have a positive impact on the court’s decision in this case, as Liedel said.

Indeed, a federal court recently ruled in favor of a Republican congressional hopeful, Eric Esshaki, who argued the stay-at-home order prevented him from collecting enough signatures to appear on the ballot.

The state then had to push the deadline back and reduce the number of signatures.

Moreover, the court’s decision had a positive impact not only for Esshaki but also for two judicial candidates who were in the same case.

The damage done by Covid-19 to the LGBTQ community in Michigan was devastating, but the excellent news came a few days ago. The court agreed to push the deadline back, giving until October to gather the rest of the missing signatures.

I am pleased that the court has taken the exceptional nature of this epidemic into account and that the nondiscrimination initiative for LGBTQ people is being treated fairly.

So this is great news to start this week, and it’s not the last one. The biggest victory of the year for the LGBTQ community just happened in the United-States 3 hours ago as I’m finishing this article and it will have a huge impact across the country.

More in this category: « Jacksonville’s LGBTQ Nondiscrimination Ordinance Is Almost Ready The Supreme Court’s Decision To Have Far-Reaching Consequences »