Kyra Edwards Dreams Of Representing The LGBT Community At The Olympics

Over 100 LGBTQ athletes are expected to compete in the Tokyo Olympics this summer, even if of course we still don’t know if the Olympics will take place because of the coronavirus. They are scheduled to start on July 24, 2020, and are due to end on August 9.

Officials met a few days ago and so far have made no decision to cancel, waiting to see how the situation develops in the coming weeks and months. They invited athletes to continue their preparations. British rower Kyra Edwards, who will proudly represent Great Britain and the LGBTQ and black communities, is among those.

She acknowledges the value of this representation and says she is proud to “be part of something bigger than myself.”

“Being insight, being proud of who I am and not shying away from showing the world who I am is important to me and an important message for anyone who wants to come into rowing or high levels of the sport,” Edwards told The Telegraph. “I’m quite lucky in that in the generation I’m in, I feel like everyone is quite liberal, everyone is open with different sexualities. I don’t know many people for who being gay is an issue.”

There are more and more LGBTQ role models in sports, but not necessarily in rowing.

“Often a lot of the choices I’ve made have been quite different to people who look like me and maybe have similarities to me,” Edwards said in the same interview.

“When no one feels like or looks like you, it can be difficult to try and identify a role model to look up to. But then it doesn’t just have to be one person. For me, Serena Williams is an amazing athlete. She’s an inspiration to me but that doesn’t mean I want to be a professional tennis player. There are aspects that I find really inspiring. I want to take those aspects. Then there are different parts of other people I find inspiring and I take them and that’s okay too… A lot of my motivations are fueled by representing people, supporting people, being part of a team, being part of something bigger than myself.”

Kyra Edwards has already won some fantastic victories in her young career, including silver and bronze at the U23 World Championships.

Like transgender BMX freestyle rider Chelsea Wolfe, Edwards is trying to qualify for the Olympics.

“If I get there in Tokyo as part of the British rowing team I’m going to be so happy,” Edwards elated.

Edwards is not only a talented rower, but she also studied statistics at UCLA and is preparing a Ph.D. in computer science. 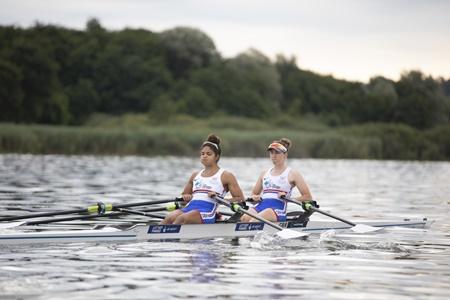 Kyra Edwards has a chance to compete in the Olympics, but what would be even more wonderful is to see her rowing at the Tokyo Olympics alongside her partner and fellow rower Saskia Budgett.

“If both me and my partner Saskia get there on the same team that would be an amazing dream,” Edwards said.

She continues: “There are lots of positives to being in a relationship with someone in the same sport as you and there are lots of things that are difficult too. We are both very open, we communicate a lot about how we are feeling, and are really supportive of each other.”

She adds: “We don’t dwell too much on the fact that the other person has any part in the reason we didn’t get selected. It feels quite independent. It wasn’t like ‘oh, you took my seat or my opportunity’. It’s more ‘okay, I didn’t make it and you did’. This is a sport where we can help each other do well. We could be sat in a boat together and helping one another get to the finish line first and get their Olympic seat. I know that if I was sat watching Saskia competing at the Olympics and I wasn’t competing, then I’d still have a smile on my face. We both just want one another to do well.”

For sure, it would be great to see them compete together!

More in this category: « Two Lesbians Denounce The Lack Of LGBT Rights In The Maldives With A Sexy Selfie 100 LGBTQ Athletes To Meet Us In 2021 For The Summer Olympic Games In Tokyo »