Fair And Equal Michigan Sent Nondiscrimination Bill To The Ballot 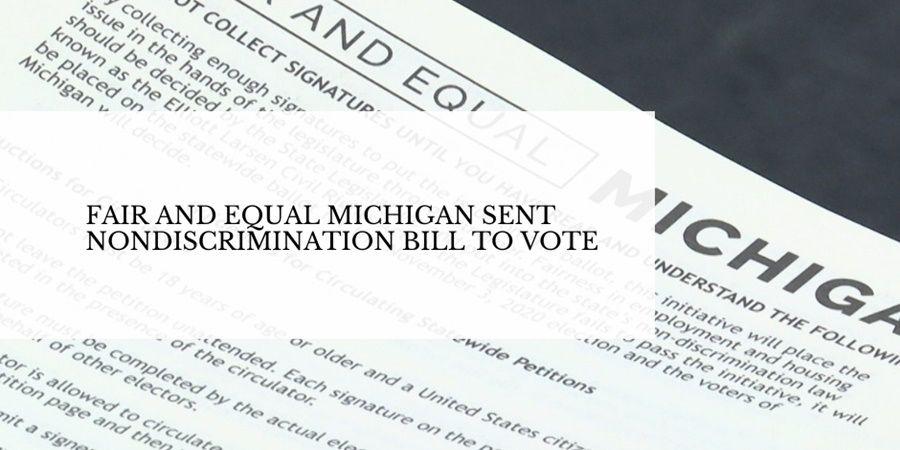 Here is some news about the Fair and Equal Michigan campaign that we have been following since the beginning of the year and that tries to amend the state's Civil Rights Law to protect LGBTQ people from discrimination based on sexual orientation and gender identity.

“We look forward to having our voices heard in the state Legislature,” said Trevor Thomas, president of Fair and Equal Michigan.

Michigan has no law against discrimination based on sexual orientation and gender identity, yet there are still many discriminatory acts.

“Today we still face, in the LGBTQ community, discrimination in the areas of housing, education, employment, and public accommodations and services,” Thomas said. “The idea someone can turn you away from a restaurant just for who you are and who you love, we believe that’s wrong.”

So the idea was to propose a nondiscrimination bill for LGBTQ people living in Michigan.

The first step was to get the Board of State Canvassers’s approval to submit the initiative, which was obtained fairly quickly.

Then you had to gather the number of signatures needed to bring it to the legislators, and the voters if necessary, and that was quite a challenge.

Indeed, the gathering of signatures had gotten off to a good start when, suddenly, the coronavirus pandemic spread around the world.

Lockdown measures were put in place in Michigan that prevented the gathering of signatures, but the main issue was that the deadline for submitting the signatures expired a few weeks later.

Fair and Equal Michigan did not give up.

Before launching the campaign, they had thought about the various scenarios that could have prevented the initiative from continuing.

A solution was quickly found after the lockdown began and an online signature system was set up.

But after the lockdown, opponents of the initiative cried out that this procedure was illegal.

As a result, considering exemptions got by some because of the pandemic, the Fair and Equal Michigan group asked for an extension of the deadline.

This allowed the gathering of signatures to continue after the lockdown was completed.

By the time the signatures were submitted, everyone could see that the minimum required the number of 340,047 valid signatures had been far exceeded. “Michigan stands united to bring LGBTQ rights into law for the first time. Our grassroots of nearly 500,000 people and the submission of signatures in a pandemic stems from the decades of changing hearts and minds by the Michiganders who have shared their story with their family and friends of who they are and who they love,” said Trevor Thomas. “We have never forgotten and deeply admire the activists and leaders who charged ahead of us, including Rep. Jim Dressel, Rep. Daisy Elliott, and Rep. Mel Larsen. Their courage made this moment possible as we continue the work of making sure everyone has an equal chance to succeed.”

The bill will now be introduced to legislators who have 40 days to pass the legislation.

Know that the Michigan legislature is under Republican control, so I don’t expect any miracles here, but please also know that if the bill is rejected by the legislators, it will be sent to voters in the 2022 General Election.

An additional step has been taken. It has been tough, but LGBTQ Michiganders can thank the Fair and Equal Michigan group for their hard work and dedication in bringing these protections.